So, I thought why not talk about some of our birthdays in Australia?

June 2015: Andy
We  were especially excited about Andy’s birthday, being the first that we’d celebrate in Australia. We didn’t have a car nor did we know much about Adelaide – it had only been two months here and in the absence of jobs, we decided to keep the celebration low key and within walking distance.
There was an Indian restaurant in Mawson Lakes and we were craving Indian food. Dinner turned out to be an absolute disaster. The butter chicken was a tomato gravy, the mutton curry was an onion paste. We could barely get through the meal. After spending a pretty penny, we walked back home in disappointment. We vowed NEVER to try a new food joint on a special occasion, lest it ruined the day.
The walk back home didn’t do anything to improve the mood. The roads were lonely and people were already asleep. It was 5 degrees and windy. Kaylin was only 3.5 years and insisted on being carried. We hadn’t come well prepared with warm clothes from India and our thin jackets did nothing. While Andy carried Kaylin, Ethan and I held each other tight and walked behind Andy, hoping to avoid the wind. It wasn’t the day we’d hoped for, but thankfully, it was a one-time failed birthday celebration.

Birthdays that followed were much better though. I recall Lesley and Barrie inviting us to celebrate Andy’s birthday at their lovely home in Hindmarsh Island. They got out they Kayaks, and Barrie took us on his boat.

Andy’s 40th was another great birthday. It was Bollywood themed, with chaat, pav bhaji, a Bollywood dance and we were surrounded by the people who mattered the most to us in Melbourne. 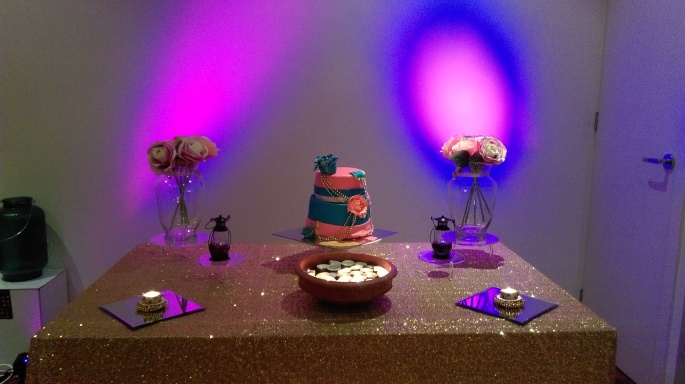 August 2016: Ethan
Ethan has ‘birthday’ luck, which translates into something bad happening before his birthday. On the 10th of August, the school called Andy, who then called me. They said Ethan had hurt his leg and needed to see a doctor. As we rushed to school, I was convinced that he had broken bones. Instead, it was deep gash on his leg and I could see the different layers of skin inside. We rushed him to the doctor who sewed him up – 8 stitches. Ethan’s adrenaline was so high that he didn’t feel all that pain. Because he had a slight fever and was told to rest his leg , we ended up having a quiet KFC birthday dinner.

That weekend, my friend Louella called us for coffee. What we didn’t know was that she felt terrible that Ethan was in bed for his birthday, so she decided to throw him (and us) a surprise one. When we got to her house, there were cakes, balloons, party games, and a spread of delicious food! Ethan was shocked! That brought tears to our eyes and we were so grateful for the warmth and love.
And yes, every year, Ethan and I are on high alert a few days before his birthday.

December 2016: Kaylin
In 2011, I was overdue with Kaylin. My doctor asked me to choose a date to induce labour. I skipped Christmas, and chose the 26th of December instead. I didn’t know at the time that 4 years later, we would be living in Australia.

The 26th of December is Boxing Day and a public holiday here. This means that you either miss the Boxing Day sales because you are celebrating your daughter’s birthday or if you live in a place like Adelaide, most food joints or entertainment places are shut and hence you can’t have a birthday party on the day, or even go out for a nice meal.

Hence, in 2016, we threw Kaylin a birthday party a few days before the holiday season. She asked for a mermaid party and we had a great entertainer arrange everything for us. Kaylin also had her cousin Naomi with her that year and it instantly made it memorable.

When Kay’s older, she’s going to love that her birthday is on Boxing Day! Imagine the great deals she’ll get from her birthday money. She’ll thank me 😉

September 2018: Me, mine!
37 and kicking. My parents have been here the last two years for my birthday, which is always a bonus. I definitely missed mama’s coconut cake this birthday 😦

My breakfast was a team effort with Andy on the bacon and eggs, Kay on the fruit salad, and Ethan on my berry and oats smoothie. Thanks guys!

Dinner was with immediate family – what a blessing to have the Junior Powers with us in Melbourne. I love watching the kids grow up together and form close bonds.  Thanks for everything, Powers!